Whether you enjoy hiking along the nature trails or viewing the many spectacular overlooks along the Illinois River, recreational opportunities abound. From picnicking to fishing to boating, from horseback riding to camping to enjoying winter sports, there’s so much to do that you’ll come back again and again.

The backdrop for your activities are 18 canyons formed by glacial meltwater and stream erosion.

They slice dramatically through tree-covered, sandstone bluffs for four miles at Starved Rock State Park, which is located along the south side of the Illinois River, one mile south of Utica and midway between the cities of LaSalle-Peru and Ottawa.

The park is best known for its fascinating rock formations.

Primarily St. Peter sandstone, laid down in a huge shallow inland sea more than 425 million years ago and later brought to the surface. While the areas along the river and its tributaries still are predominantly forested, much of the area is a flat, gently rolling plain. The upland prairies were created during an intensive warming period several thousand years after the melting of the glaciers. The Illinois River Valley in the Starved Rock area is a major contrast to the flatland. The valley was formed by a series of floods as glacial meltwater broke through moraines, sending torrents of water surging across the land and deeply eroding the sandstone and other sedimentary rocks.

During early spring, when the end of winter thaw is occurring and rains are frequent, sparkling waterfalls are found at the heads of all 18 canyons, and vertical walls of moss-covered stone create a setting of natural geologic beauty uncommon in Illinois. Some of the longer-lasting waterfalls are found in French, LaSalle and St. Louis canyons.

Waterfalls, rivers and streams can undercut a cliff, creating overhangs in the sandstone. 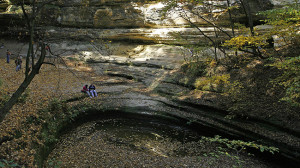 Overhangs like Council Overhang at the east end of the park. Other sights can be seen from the bluffs themselves, which provide vantage points for enjoying spectacular vistas. The porous sandstone bluffs allow water to soak quickly through, only to collect in greater quantities on the slopes below. The resulting lush vegetation supports an abundant wildlife and bird population, including woodchucks, moles, vireos and catbirds. Wood ducks that nest in hollow trees occasionally can be seen paddling along the river’s edge. Evidence of beavers and muskrats can be seen as you walk along the River Trail.

Farther away from the bluffs, red oaks and hickories predominate in deeper soils. Typical plants characteristic of the forest floor include the American witch hazel, black huckleberry and bracken fern. Nuthatches and chickadees feed on nuts, seeds and insects found in the bark of trees. Raccoons and flying squirrels spend many hours searching for and gathering berries and nuts.  At the forest edge, bright blue indigo buntings flit through the wild crab apple and plum trees that skirt the former glacial till prairie, while cottontail rabbits scamper through the bluestem and Indian grasses. In the sandy prairie soil, prickly pear cactus grows alongside lead plant, compass plant and rattlesnake master. White-tailed deer come to munch on the sumac, and red-tailed hawks soar overhead in search of voles and field mice.

Throughout spring and summer, wildflowers are as plentiful and varied as they are beautiful.

Included in the floral array are colorful lichens and mosses, marsh marigolds, wild iris, trillium and Dutchman’s breeches, plus purple-flowered spiderworts, nodding or orange columbine and the magenta blooms of shooting star.

The poison ivy plant is found in all areas of the park. Its greenish-white berries provide an important food source for birds.

Starved Rock State Park is host to a number of enjoyable annual events, including the Winter Wilderness Weekend in January, the Cross-Country Ski Weekend in February, the Annual Wildflower Pilgrimage in May, the Montreal Canoe Weekend in June and the Fall Colors Weekend in October. There also are scheduled guided hikes most weekends.

Generally open daily, the visitor center offers displays and exhibits explaining the park’s cultural and natural history. A weekly schedule of activities and hours is posted. Schools and other organized groups may arrange reservations for programs by contacting the center at (815) 667-4906 or writing to Program Coordinator, Starved Rock State Park, PO Box 509, Utica, IL 61373.

Situated on a high bluff just southwest of the rock itself is the stone and log lodge built in part by the Civilian Conservation Corps in the 1930s. The lodge has been refurbished, but still reflects the peaceful atmosphere of yesteryear. A new hotel wing has been added and features a registration lobby, an indoor swimming pool, children’s pool, whirlpool, saunas and an outdoor sunning patio.  The lodge offers 72 luxury hotel rooms and 22 comfortable cabin rooms. The original Great Room is furnished with decorative rugs and art and is centered around a massive stone fireplace.

This area has been home to humans from as early as 8000 B.C. Hopewellian, Woodland and Mississippian Native American cultures thrived here. The most recent and probably the most numerous group of Native Americans to live here was the Illiniwek, from the 1500s to the 1700s. Approximately 5,000 to 7,000 Kaskaskias, a subtribe of the Illiniwek, had a village extending along the bank of the Illinois River across from the current park.

In 1673, French explorers Louis Jolliet and Father Jacques Marquette passed through here on their way up the Illinois from the Mississippi. Known as “Pere,” the French word for “Father,” Marquette returned two years later to found the Mission of the Immaculate Conception-Illinois’ first Christian mission-at the Kaskaskia Indian village.

When the French claimed the region (and, indeed, the entire Mississippi Valley), they built Fort St. Louis atop Starved Rock in the winter of 1682-83 because of its commanding strategic position above the last rapids on the Illinois River. Pressured from small war parties of Iroquois in the French and Indian wars, the French abandoned the fort by the early 1700s and retreated to what is now Peoria, where they established Fort Pimitoui. Fort St. Louis became a haven for traders and trappers, but by 1720 all remains of the fort had disappeared.

Starved Rock State Park derives its name from a Native American legend of injustice and retribution. In the 1760s, Pontiac, chief of the Ottawa tribe upriver from here, was slain by an Illiniwek while attending a tribal council in southern Illinois. According to the legend, during one of the battles that subsequently occurred to avenge his killing, a band of Illiniwek, under attack by a band of Potawatomi (allies of the Ottawa), sought refuge atop a 125-foot sandstone butte. The Ottawa and Potawatomi surrounded the bluff and held their ground until the hapless Illiniwek died of starvation- giving rise to the name “Starved Rock.”

The Illinois State Parks Commission was initially headquartered in Starved Rock State Park after the park was purchased in 1911.

Hiking Exploring the majestic bluffs and canyons is the park’s primary attraction, and there are 13 miles of well-marked trails to help you enjoy them.

The trails are open all year, but hikers are urged to exercise extreme caution and to stay on official trails. To keep you oriented, trail maps are located at all trail access points, intersections and points of interest. There are colored posts along the trails, corresponding to colors on the maps, and letter symbols on the trail brochure to further assist you. Finally, yellow dots on trees or posts indicate that you are moving away from the lodge or visitor center, and white dots mean you are returning.

Due to the park’s fragile ecosystem, camping is prohibited in unauthorized areas and all rock climbing, rappelling or scrambling off trails is prohibited. Biking is not allowed on the hiking trails. For your own safety, you must be off the trails by dark. Alcohol is prohibited on all trails.

**Please note that there are no washrooms or drinking water areas on the trails.

Boats may be launched from the west end of the park. Also, paddlewheel boat rides are available.

Boats are not allowed within 600 feet of the dam, as strong currents and powerful undertows can be dangerous.

Catfish, bullhead, white bass, sauger, walleye, carp and crappie may be caught in the Illinois River.

Under no circumstances should you attempt to wade or swim in the river, canyons or from any park shoreline.

Cross-country skiing can be enjoyed in the picnic area and at nearby Matthiessen State Park. Cross-country ski rentals are available at Matthiessen Dells Area on weekends December through March. Tobogganing and sledding are possible east of the main parking lot, where you’ll also find an ice skating area and heated washrooms. Snowmobiling is not allowed anywhere at Starved Rock, but is allowed at the I & M Canal one mile to the north in Utica.

There is a large campground in the south of the park, with 133 Class A-Premium campsites complete with electricity, showers and flush toilets, a separate youth group camping area and a children’s playground. Permits may be obtained from the park office or at the permit booth in the campground area. Seven campsites are accessible for people with disabilities. Alcohol is prohibited in the campground. NEW – There is a new camp store open in the campground this year. The store will sell fire wood, ice, soda, and other camping supplies.

I-80 Eastbound and Westbound:

From the Chicago area: